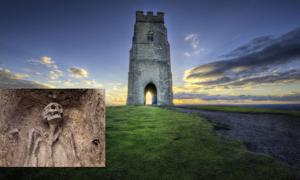 When researching the reality of giants in the past, one story which has survived the ages is the apparent discovery of the ‘Glastonbury Giant’ which was allegedly unearthed in 1190, on orders of King Henry II , following rumors that the legendary King Arthur was in fact buried at that specific location. Here, between two ancient pyramid-shaped pillars at Glastonbury in Somerset, England, workers dug down to a depth of seven feet where they found a leaden cross with the inscription: